Proposify now integrates with Pipedrive, the popular CRM app. In addition to the standard CRM integration we offer for other products, such as importing contacts and creating deals, we offer a lot more comprehensive integration that should make your sales process as streamlined as possible.

When we first started integrating with CRMs, the workflow was pretty simple - allow users to import their contacts and automatically create deals/opportunities when a proposal is sent. Then mark it as won/lost in the CRM when a client accepts/declines it.

With Pipedrive, we wanted to integrate on a deeper level than before.

Our knowledge base has an article that explains in detail how to use the Pipedrive integration, but in a nutshell it works like this:

Paste in your API key from Pipedrive and import your contacts. You’ll notice after you connect that you can choose which deal column in Pipedrive your proposals should automatically go in. 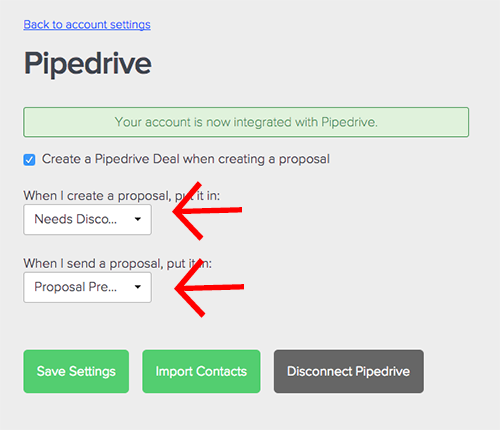 Now when you create a proposal in Proposify a few things will happen:

Next when you send out your proposal, the Pipedrive deal is moved to where you specified.

When your client views the proposal in Proposify and leaves comments, they appear as notes in the Pipedrive deal 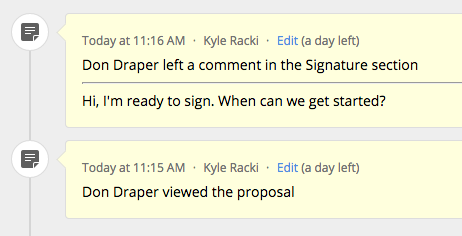 And finally when the proposal is accepted, your deal will automatically update accordingly and upload a PDF of your proposal to the deal in Pipedrive.

I hope you enjoy connecting Proposify with Pipedrive! If you’re a Pipedrive user, please reach out and let us know how you like the integration and how it could be better. Next month we plan on going through our existing CRM integrations (Highrise and Salesforce) and getting them up to the same standard before moving on to other CRMs.

If you haven’t already, be sure to take the integration survey so we can prioritize future integrations. Up next on our plate is Xero and InfusionSoft, but since we’re seeing a huge demand for Zapier and the ability to have clients pay online via Paypal and/or Stripe we’re carefully considering moving those up in priority before tackling any other CRM or invoicing integrations.

Up until now you needed to place your images outside of text boxes, which became annoying when you wanted text to wrap around images or even just have images flow with your text.

I’m happy to report now that you can place images within text boxes!

To start, click on the image tool within the tool bar when your cursor is inserted in a text box. Don’t use the image button on the left-hand toolbar, that’s still used for images outside of text boxes. 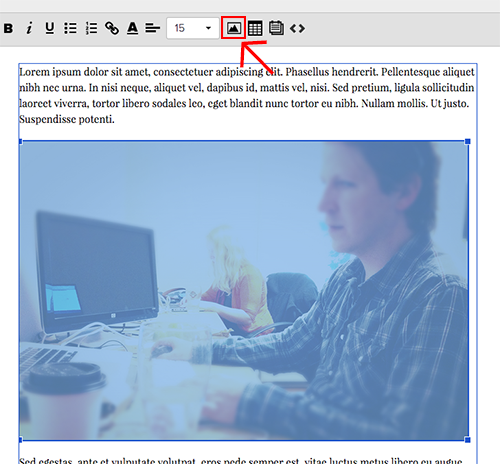 Upload your image and insert if from the library. Once you do you can align the text to the left or right to have text wrap around it, either by clicking on the alignment button in the tool bar or right clicking and choosing your alignment. 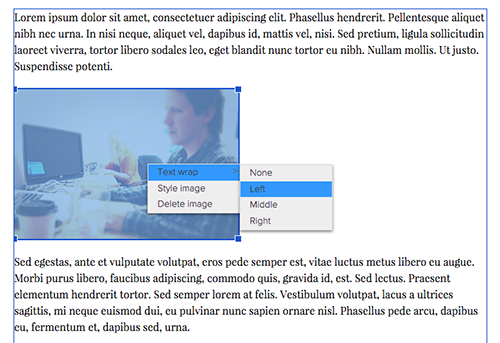 You can resize the image by dragging the corner handles, and you can right click to change style properties, like width, height, padding, border size and border color. 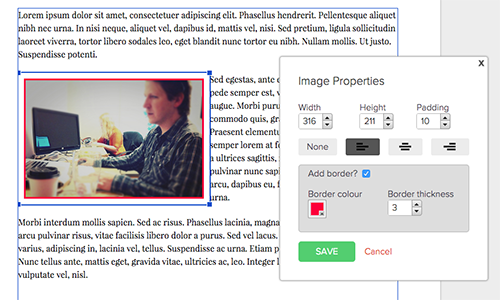 We’ve been hard at work on some other awesome new features and improvements:

As always, I look forward to your feedback, and thanks for being a customer! :)

Discover the Always-Be-Closing tool that gives your sales team the competitive edge.

Proposify streamlines your proposal process from creation to close and every deal-making moment in between.